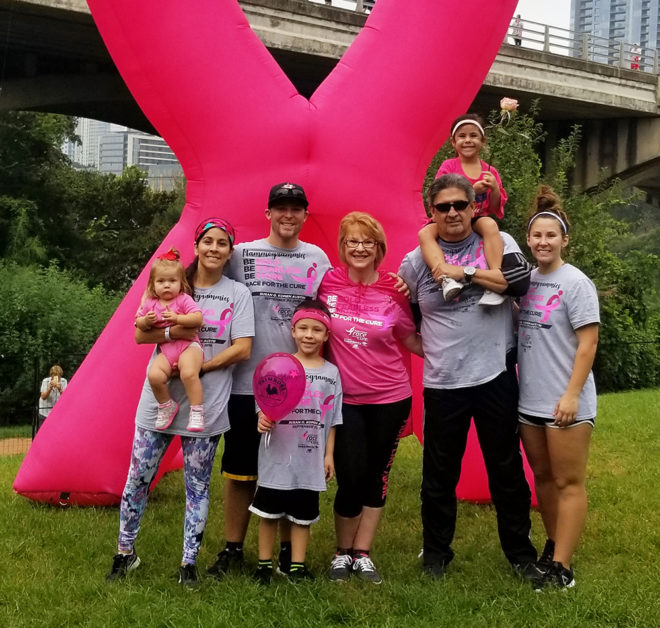 If you want to know how to advocate yourself and your health, Cathy Robins Ramos is an excellent teacher. She learned the importance of this the hard way when she was young. In 1971, when Cathy was a teenager, her mother had the first mammogram ever performed in the state of Oklahoma. At the time, radical mastectomy was a standard response to breast cancer and reconstruction was not available, so from her adolescence Cathy had a visible reminder of her mother’s brush with mortality. (Her mother is now a 47-year survivor.)

Cathy decided not to take any chances, so at 23 she paid out of her own pocket to get her first mammogram. “At the time, I struggled to come up with the money,” she says, “but I try to be proactive.”

In 2003, Cathy herself was diagnosed with cancer in her right breast. She was a single mother with three children, just starting her own oil and gas research business—and didn’t know that help was available to her. “I didn’t realize that I didn’t have to choose between a mammogram and groceries,” she says. A full run of surgeries, radiation, and tamoxifen put her into remission, but she went on to have more abnormal mammograms and seven additional biopsies over the following 13 years.

Then in 2016, she felt a nodule under her left arm, something her most recent mammogram had not picked up. She took herself to Austin Radiological Association (ARA) who performed an ultrasound and immediately sent Cathy to a surgeon.

On April 1, she learned that this time the cancer was invasive. And this time, newly married to the love of her life, Al Ramos, Cathy was even more determined to be her own best advocate. “We asked a lot of questions. We asked about additional testing to make sure we got it all,” she says. She learned about oncotype DX pathology, which helps the patient and her oncologist decide what treatments will work best. Cathy’s results predicted that chemotherapy would only provide 1 percent improvement in her recovery, so she decided to just have surgery and radiation and take Anastrazole for 10 years—and forego chemo.

Now cancer-free, Cathy continues to support Komen because she knows the donations save lives and because she wants to empower other women like her. “Knowledge is power,” she says. “Take control of your body. Take control of your medical care…. Many people are unaware that if you don’t have resources that there’s help out there. Women don’t know about it – still. That’s why I stay involved.”

Cathy’s Austin MORE THAN PINK Walk team, the Mammogrammies, is made up of her extended family, including husband Al, children Stephanie, Garrett, and Macee, and their spouses and children.