You are here: Home » WHY AUSTIN WALKS | Survivor Lisa Weier 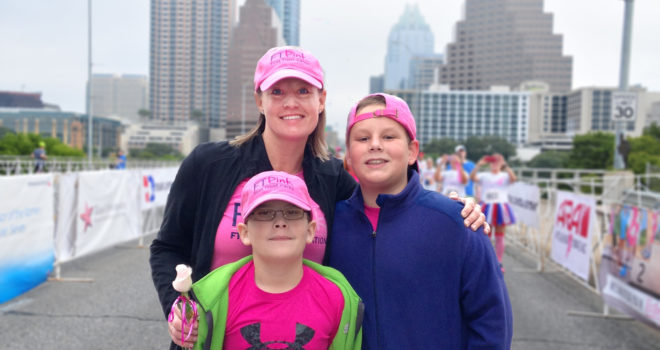 “You can tell almost immediately when someone is doing something because it’s just a job versus when it’s a passion,” says Lisa Weier about the first time she met the leadership at Susan G. Komen Greater Central and East Texas.

Weier is the director of development at FT Cares Foundation, the philanthropic arm of investment firm First Trust Portfolios, L.P. Weier’s job is to help decide where to commit the Foundation’s charitable donations, almost all of which comes from First Trust’s employees.

While the company’s headquarters are in Chicago, Weier looks at nonprofits all over the country—particularly in cities like Austin where First Trust has a satellite office. The decision to sponsor the Austin MORE THAN PINK Walk came relatively easily.

“We look to partner with organizations that are really fulfilling their mission and that share our passion for changing lives of people in their communities,” Weier says. She adds that Komen Greater CETX’s passion is visible in its staff, particularly its executive director, Suzanne Stone. “You can tell she’s the sort of person who goes home at night and says, ‘What else can we do? How do we make the lives of people with metastatic breast cancer better?’”

Weier is also the sort of person who doesn’t leave her passions at the office door. About nine years ago, she was outside counsel for First Trust, when her life took a dramatic turn. In less than a year, she lost both her parents (her mother to non-Hodgkin’s after two years as a breast cancer survivor), then got divorced, and was herself diagnosed with breast cancer—all while caring for two young children. She knew it was time to re-evaluate her life. “I compare it to taking your purse and dumping it out and deciding what to put back,” she says.

She began working as in-house counsel at First Trust and volunteered with the FT Cares Foundation. Soon she was working exclusively for the Foundation. She says it “truly is my dream job. It’s really life-affirming.”

Today a nine-year survivor, Weier says she’ll probably always be associated with the Komen Walk in some form. “My mom and I were both involved in Komen, even finishing the 3-Day in San Diego just six months before she passed away, so it’s always been at the forefront of my mind,” she says.