You are here: Home » WHY WACO WALKS | Survivor Sandra Henry 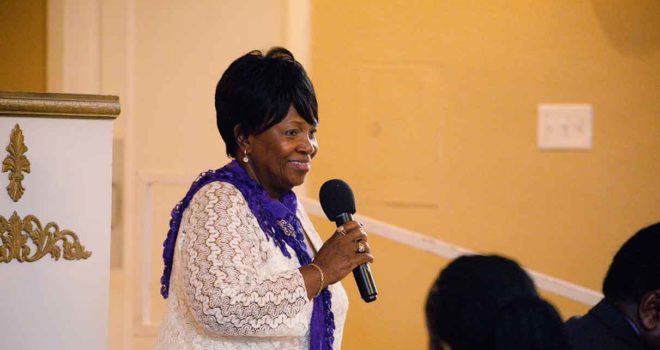 Sandra Henry isn’t sure what first compelled her to get involved in breast cancer advocacy. She had no family history with the disease, but felt a powerful urge to do something good for her community.

So she spent many years organizing teams for the Susan G. Komen Race for the Cure in Waco, where she lives.

In fact, much of Sandra’s life has been about caring for people through the good and hard times. She spent 24 years in government service, ending up as the Women Veterans Coordinator for the VA—she and her husband are both retired military veterans. She is also an ordained minister at the Abundant Love Fellowship Church and has devoted much of her time to ministry and to nonprofit organizations in her community.

In 2015, five years after she retired, Sandra had to postpone her regular mammogram because of insurance changes. When she was able to get in to see her regular doctor six months later, they found she had Type II carcinoma breast cancer. “I have to emphasize: make sure you have your mammogram because it’s so important,” she says. “If I’d blown it off that year, I have no idea what would have happened.”

After a lumpectomy (no chemotherapy or radiation), Sandra has been cancer-free for the past four years.

After her own brush with breast cancer, Sandra’s commitment to help others through this disease became stronger than ever. She and four other women started their own organization, the Cattleya Foundation of Hope, which assists people who have cancer from diagnosis through treatment. And she’s become even more involved with Komen Greater Central and East Texas, now serving on its Waco Walk Committee.

And for Sandra, with that bond comes the push to action. Fighting breast cancer and supporting people through it “takes everybody to get on board—everyone to put their penny in, everyone to get involved, even if it’s just praying.”